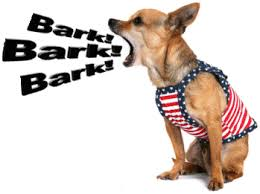 Why does my dog bark? And what can I do to stop it?

Thousands of years ago, humans began the process of domesticating the dog and shaping what “being a dog” really means. Through careful selection and breeding, an astonishing variety of dog breeds have been created. Desirable traits have been selected, in various breeds, that are of a benefit to humans. There are some traits, however, that quickly become undesirable when expressed too frequently. Barking is an example of a natural behavior that is encouraged in terms of guarding behavior, but becomes a problem when the behavior is produced in excess. A recent health insurance investigation revealed that the sound of a continually barking dog was cited as the most disruptive and stress inducing noise for humans.

Why Do Dogs Bark?

Barking, in addition to whining, howling and growling, is a dog’s natural means of communication. A dog bark is characterized by a series of short, sharp sounds, that tend to vary little in tone or pitch. A dog bark can signify territorial protection, exertion of dominance, or expression of some need. Typically, barking is “a means of communication triggered by a state of excitement.” Being a natural trait, barking is not considered a behavioral problem, until it is produced in excess.

Problem barking has a variety of origins. Genetics does influence a dog’s tendency to bark. Certain breeds belonging to the terrier family are prone to more frequent barking than breeds such as Greyhounds or Basenjis. Generally, however, excess barking can exist in any breed of dog. The key to solving the problem of inappropriate barking is to determine what external stimulus is triggering the behaviour. Improper confinement can be a major cause of problem barkers.

Environmental sounds can also trigger barking. These sounds include such things as the barking of other dogs, the sound of passing cars, strange voices, thunder, and mechanical noises such as the ringing of the phone. Noises can initiate barking at different times of the day. A dog may not bark at accustomed sounds during the day, but at night may be incited to a volley of barking, much to the chagrin of the neighbors, by the slightest of noises. Other causes of problem barking can include separation anxiety, or the temperament of the dog: an over-aggressive animal may bark at the smallest provocation. A strongly territorial dog may bark at any stranger, invited or uninvited, entering your property. 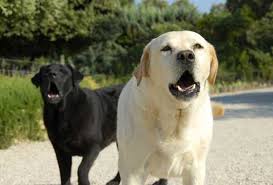 Excess barking can be a serious behavioral problem and can often mean the termination of the relationship with the dog, or the dog itself, if left untreated. The following includes information on how to solve your dog’s problem barking as recommended by the veterinary profession.

The first step in solving problem barking, is to determine if your dog is barking in response to inadequate shelter or improper confinement. If this is the case, the dog must be provided with a comfortable amount of space or supplied with a doghouse if outdoor shelter is inadequate. Increasing the amount of exercise given to your dog may also help.

In the event your dog is barking in response to environmental noises, or the barking is simply due to its temperament, behavioral modification methods should be used. These methods can include reconditioning using a verbal reprimand such as “No!”, and leash correction. It should be noted however, that you should never yell at your dog, as loud noises may encourage your pet to bark more. Also keep in mind the correction should be applied while the barking is occurring, in order for your dog to associate the unwanted behavior with the correction. Also remember to reward your dog when it stops barking.

Indirect intervention methods can also be applied. These techniques can range from spraying your dog with water while it is barking, to using noise producing devices such as “Dog Stop” or “Barker Breaker,” which emit loud or high frequency sounds that interrupt and deter barking. These devices can be controlled by the owner, or triggered by the dog bark. In the event your dog is resistant to these behavioural modifications, more drastic action can be taken in the form of bark activated shock collars. This device is particularly effective when barking occurs in the owner’s absence. Shock collars, however, are recommended only after other control measures have failed. A final resort, when all other behavioral modification methods have been tried, and particularly when the dog’s life is in question, is a vocal cordectomy (debarking). This surgical procedure involves removal of all or part of the vocal cords.

The key to solving the problem of excess barking in your dog begins with an understanding of what is causing this behavior.  Once you have determined a cause, you have a greater chance of choosing the most effective solution (e.g., more exercise) or behavioral modification. Modifying such an instinctive and natural behavior as barking can be difficult, and may require considerable patience, time, and hard work. Solutions, however, are possible, and worth the effort.  Wagging Tails Pet Sitting and Mobile Grooming in CT, www.waggingtails.com (860) 621-7387 (pets)