What is your dog trying to tell you? 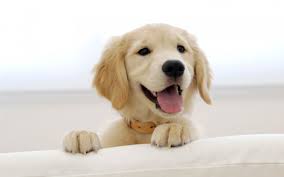 Is barking a form of language among dogs with precise significance, or just playful noise?

Dogs exchange information among themselves less by voice than by a wide range of facial expressions, body postures and gestures, as well as by various scents. Dogs, who bark at night, are probably working off excess energy or announcing their presence, and this is undoubtedly the only message conveyed to other dogs within ear shot.[clear-line]

When a dog goes to his owner and deliberately barks, it is simply meant to attract attention. You must try to guess his general behavior, rather than from the circumstances and his general behavior, rather than from the particular form or pitch of bark he makes. The howling or baying of hunting dogs is an instinctive hunting cry informing the pack that the dog is on a trail. Barking at strange noises is a warning as well as a threat display.[clear-line]
A lonely dog who howls may be sending out a gathering cry to other dogs nearby. Wild dogs on the other hand, never bark, they only howl. Could the barking of domesticated dogs be a form of communication more closely resembling speech? A pet dog that shares a close relationship with his owner and has been taught to understand many words obviously makes an effort, sometimes quite successfully, to give meaning to his own utterances.[clear-line]
A dog who wishes to assert his importance and boldness instinctively employs all of the effects that make him look bigger and more frightening, raising his back to increase his height and holding his head high in defiance.[clear-line]
A dog who wants to show submission does just the opposite, making himself look small by crouching down with his tail between his legs and his ears laid back flat.[clear-line]
A dog who wishes to assert his dominance will take a perpendicular position with his head over the other dog’s shoulders, while nudging or pushing, with his neck arched, head and tail raised and tense. The conventional play invitation is a posture with the forehead crouched, the hind quarters high, a wagging tail, bright eye and a little yap. A rigid stance with a steady gaze and a high, trembling tail is hostile. A high, steady tail signifies self confidence, and held low indicates inferiority, fatigue, ill health, or a bad mood.[clear-line]
Pawing at the neck is an expression of affection, nose-nudging is another invitation to play. Paw-giving is a conventional canine gesture with two possible meanings. When he gives his paw to his owner while avoiding eye contact he’s saying “Please forgive me” or when he wants attention, he is saying “I’m here, don’t forget me.” When he offers his paw to another dog, it’s a sign of submission.[clear-line]
An owner, who takes the trouble to observe his dog and pay him the courtesy of listening to him, can establish a simple two-way communications system with his pet. Canine messages are generally very elementary, as he asks much less of us than we do of him. “I’m hungry,” “I’m thirsty”, “I need to go out”, or “Come with me I think something is wrong” are among the messages he manages to convey very well considering his limited means. His most eloquent utterance is the emotional gurgle of barks that means to say “I’ve missed you!”[clear-line]
Wagging Tails Pet Sitting & Mobile Grooming Service in Connecticut is a professional pet care company of 22 years, award winning, bonded, insured and looking forward to caring for your pet!
www.waggingtails.com 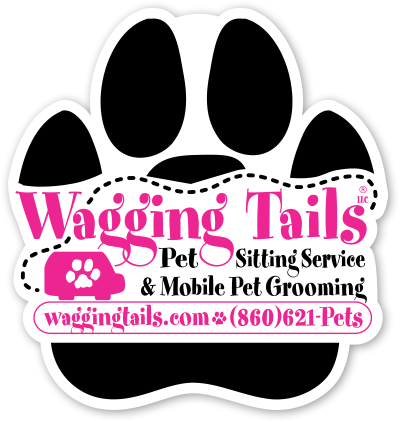